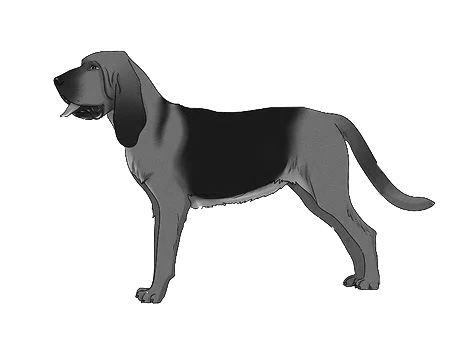 Scent hound for large game venery, service dog, tracking dog and family dog. It was and it must always remain a hound which due to its remarkable sense of smell is foremost a leash hound, often used not only to follow the trail of wounded game as in the blood scenting trials but also to seek out missing people in police operations. Due to its functional construction, the Bloodhound is endowed with great endurance and also an exceptional nose which allows it to follow a trail over a long distance and difficult terrain without problems.

BRIEF HISTORICAL SUMMARY:
Large scent hound and excellent leash hound, with very ancient antecedents. For centuries it has been known and appreciated for its exceptional nose and its great talent for the hunt. It was bred in the Ardennes by the monks of the Abbaye de Saint-Hubert. It is presumed to descend from black or black and tan hounds hunting in packs which were used in the 7th century by the monk Hubert, who was later made a bishop and who when canonised became the patron saint of hunters. These big scent hounds spread throughout the Ardennes, due to the presence of large game, sheltering in the widespread forests of the region. These Saint- Hubert hounds were famed for their robustness and their endurance, especially when hunting wild boar. The first Saint-Hubert hounds were black but later black and tan was also to be found. In the 11th century these dogs were imported into England by William the Conqueror. At the same time, dogs of the same type but with an all-white coat, called Talbots, were also introduced there. In England the imported dogs provided the basic root stock. The progeny of these Bloodhounds received their name as a derivation of " blooded hound " which means a dog of pure blood, therefore a pure-bred. Subsequently the breed was also developed in the United States of America. In the Southern States especially, these dogs were used for hunting runaway slaves.
GENERAL APPEARANCE:
Large-sized hound and massive leash hound, the most powerful of all the scent hounds. It is harmonious in its lines, endowed with strong bone, good muscle and a lot of substance, but without ever appearing heavy. It is long in structure, fitting into a rectangle. The overall appearance is imposing and full of nobility. Its attitude is solemn. The head and neck attract attention because of their abundant, supple and thin skin, hanging in deep folds. Its movement is impressive, rather slow and with a certain rolling gait but lithe, elastic and free. No characteristic should be so exaggerated as to destroy the harmony of the whole, to give an over- done appearance or even less to harm the health or well-being of the dog. Among possible exaggerations should be mentioned eyes which are too deep set or too small; distended eyelids; too much and too loose skin with too many and too deep folds; too much dewlap; too narrow a head. Dogs which are too big, with bodies too heavy or too massive, are equally undesirable because this impedes their function.

Gentle, placid, kind and sociable with people. Particularly attached to its owner. Tolerant of kennel companions and other domestic animals. Somewhat reserved and stubborn. Just as sensitive to compliments as to corrections. Never aggressive. Its voice is deep but it rarely barks.

The most characteristic point of the breed is the imposing and majestic head, full of nobility. It is deep but narrow in relation to its length and long in relation to the length of the body. The bone structure is clearly visible. The lateral sides are flattened and the profile is square. The topline of the muzzle is near1y on the same plane as the upper outline of the skull. On the forehead and cheeks, the abundant thin skin forms wrinkles and deep folds, falling when the head is carried low and continuing into the strongly developed folds of the dewlap. The skin is less abundant in the female.

Skull: Deep, long, rather narrow with flattened sides. The brows are not prominent although they may appear so. The occipital peak is very developed and distinctly pronounced. Stop: Only slightly marked.

Nose: Black or brown, always black on black and tan dogs. The nose is broad, well-developed, with wide open nostrils.
Muzzle: As long as the skull, deep, broad near the nostrils and of equal width throughout its length. The topline of the muzzle is muzzle is either straight or slightly convex (slight ram's nose). Lips: Very long and limp; the upper lips fall over the lower lips and at the front form a right angle with the upper line of the foreface, which gives a square profile to the muzzle. Towards the corners of the mouth they become fleshy flews (less pronounced in the female) which blend imperceptibly into the abundant dewlap. The edge of the upper lips comes down about 5 cm below the lower jaw. The edge of the lips is well-pigmented, black or brown, depending on the nose colour. Jaws/Teeth: Complete dentition, in correct scissor bite; strong white teeth, set regularly in well-developed jaws. A pincer bite is tolerated.
Cheeks: Hollowed and lean, especially under the eyes.

Dark brown or hazel, of a lighter hue (amber) in dogs without black saddle or mantle. Eyes of moderate size, oval, not weeping, neither protruding nor sunk into the socket, leaving the iris totally visible. Lids with no irregularity in their contour, normally fitting around the eyeball; lower lids a little slack so that a little haw is visible are nevertheless tolerated. At no time should the eye-lashes touch or interfere with the eyes. The expression is gentle, kind and dignified, with a rather melancholy air.

Thin and supple, covered in short hair, delicate and velvety to the touch ; very long lobes, reaching at least beyond the end of the nose when they are laid on the upper line of the foreface; ears set very low, level with the eyes or even lower, on the side of the head, falling in graceful folds curling inwards and backwards (curling ears).

Long so that the dog can follow the trail with its nose on the ground; strongly muscled ; the skin of the throat is loose and extremely developed, presenting a double dewlap, but this is less pronounced in the female.

Long, strong, thick, set high, in continuation of the dorsal line ,tapering gradually towards the tip; carried sabre fashion ; on the move the tail curves gracefully above the line of the back, never curled or twisting sideways .The underside of the tail is furnished with harsher hair, about 5 cm long, which becomes progressively shorter towards the tip.

The assessment of the very typical movement of the Bloodhound is extremely important. At its normal gait, the trot, the movement is even, with measured steps, springy and free, covering more ground than any other scent hound and very characteristic of the breed, rolling but without crabbing. The hind legs move well at the back, there is good drive from the hindquarters, the reach of the fore and hindquarter movements is equal and the topline remains horizontal. The limbs move parallel but at greater speed the feet single-track. The tail is carried high like a sabre without the curve becoming too pronounced. The Bloodhound must be capable of maintaining a trot for a long period of time without showing signs of tiredness.

Supple over all the body, loose and elastic. The thin skin, very loose and abundant over the head, is very characteristic. On the forehead and the lateral sides of the foreface, the skin forms folds which hang down and which are even more noticeable when the head is carried low .However over-done wrinkles and folds on the forehead and brows must never harm the eyes. Folds of skin on the body due to too much skin are not desirable.

Hair: On the body, the close-lying hair is short, dense, quite harsh and weatherproof. On the head and ears the hair is very short and soft to the touch. The underside of the tail is furnished with hair a little longer and coarser.
Colour: There are three distinct coat colours: the bicolours black and tan and liver and tan and the unicolour red. Among black and tan dogs, the amount of black varies, according to whether it is a mantle or a saddle. In a dog with a mantle, black is predominant: the tan (fawn) is only found on the muzzle, the cheeks, above the eyes, on the forechest, on the limbs and the anal region. A dog with a saddle has a greater expanse of tan because the black is more or less limited to the dorsal region. The same positioning of coloured zones is to be found in the bicoloured liver and tan. The colours are not always clearly stated nor distinctly defined. In the darker areas, it is possible to find them interspersed with lighter or badger hairs. Such a mixture of different coloured hairs is allowed. For the unicoloured red, the red can vary from light red to dark red. A washed-out tan for bicolours or red for unicolours is not sought after. A little white on the forechest, on the toes and at the tip of the tail is tolerated without being sought after.

Any departure from the foregoing points should be considered a fault and the seriousness with which the fault should be regarded should be in exact proportion to its degree and its effect upon the health and welfare of the dog.
• General appearance: Cloddy; lacking in substance; light bone; too high or too low on leg, square construction rather than rectangular; lack of nobility.
• Head : Skull broad and voluminous or excessively narrow ; receding forehead ; skin on forehead falling too far forward; occipital peak not sufficiently pronounced; too marked a stop; bridge of nose concave; muzzle short or not deep enough; top lips not pendulous enough.
• Nose and lips: Loss of pigment.
• Dentition: Teeth missing.
• Eyes: Too small, too sunken in sockets; lower lid too pendulous, too much haw visible.
• Ears: Too short, too thick, set above the eyeline, too close to the head, too flat.
• Neck: Short, slender, very little dewlap.
• Body: Short or too long; chest not well let down, forechest not protruding enough in profile; slab-sided or barrel-chested ; weak or arched back, croup overbuilt or falling away; belly too tucked up.
• Tail: Low set; squirrel tail, ring tail, curled tail; knotty or kinked tail; hook or deviated tail. • Limbs : Under or over angulated ; short upper arm ; not upright seen in profile ( front pasterns too sloping or wrists weak ), nor from the front ( feet turning out or in, forearm curved, elbows out etc. ) or from behind ( hind legs too close together, wide apart or barrelled ; hocks closed or open etc); spreading, hare or flat feet.
• Gait / Movement: Close movement or open; weaving, crabbing, restricted or stilted gait; mincing gait; poor transmission by the back.
• Coat colour: Light or washed-out colours.
• Temperament: Lacking in confidence or shy.

• Aggressive or overly shy dogs.
• Any dog clearly showing physical or behavioural abnormalities shall be disqualified.
• General appearance: Lack of breed type.
• Dentition: Over or under shot; wry jaw; crooked mouth.
• Nose and lips: Very lacking in pigment or pink; anything other than black in black and tan dogs; anything other than brown or black in dogs without black saddle or mantle.
• Eyes: Light yellow (hawk eyes).
• Coat colour : Any colours which do not correspond to those described ; too widespread white markings, such as white going up as far as wrists or hocks, or too much white on the forechest ; white patches anywhere other than the forechest, toes and tip of tail, like a white muzzle or a white blaze etc. • Size: Outside the tolerated limits.

• Male animals should have two apparently normal testicles fully descended into the scrotum. • Only functionally and clinically healthy dogs, with breed typical conformation should be used for breeding.